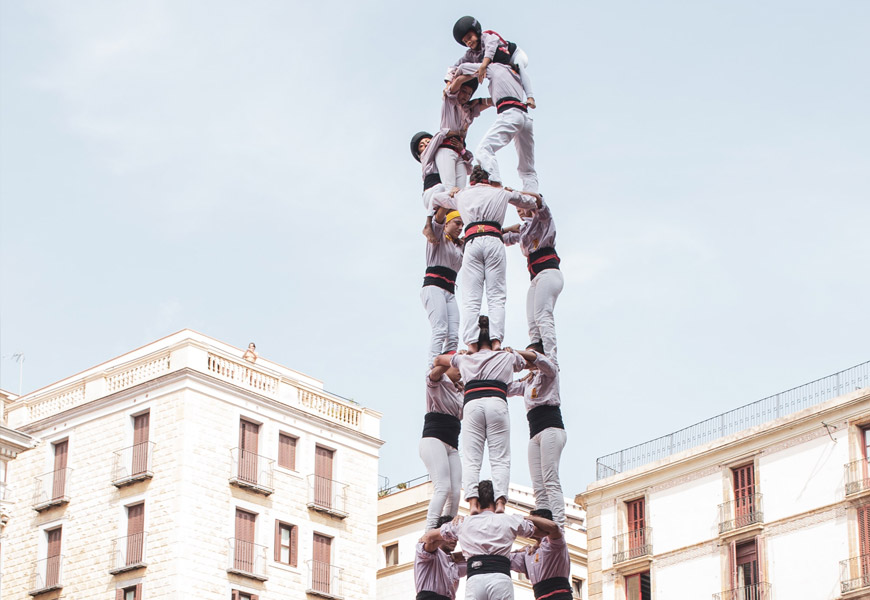 Spain is synonymous with fiestas. In our region, especially during the summer, there is a fiesta every weekend.

Also our village Les Gunyoles has a fiesta major, a big summer festival, in the first weekend of August.

The most spectacular part of the fiestas are the human towers.

The birthplace of these ‘castellers’ is the town of Valls, a 45-minute drive from Cal Mestre.

During the local name day Santa Úrsula the central Plaza del Blat fills up with locals. Two rival groups (the Colla Vella and the Colla Jove) from the town have been competing for over 200 years to see who can make the highest human tower.

The result is seven storeys high and shaped like a pine cone. The tradition dates back to the beginning of the 19th century.

The groups do not just do anything: each group leader first makes a sketch of his human castle, almost like an architect. The drawing includes things like buttresses and pillars.

First, the group builds the base of the tower. Dozens of strong men put their arms around each other’s shoulders to create a solid base.

Lighter men climb on top and a child climbs up to the very top. The highlight is when he reaches the top and he waves his arm above his head: that is literally ‘the signal’ and the whole square goes wild.

Apart from being spectacular to see, the human towers are also an expression of the Catalan national character: powerful, balanced, courageous, and earthy. Strength carries the weight of the tower. Balance is needed to climb up and courage to reach the top.

Valls has introduced a second custom to Catalonia during the fiestas: the calgotades. These are street parties that take place at the end of winter.

During the calgotades people eat a lot. These fiestas traditionally begin with calgots: spring onions are roasted and peeled, and then dipped in a thick sauce consisting mainly of peppers, tomatoes and garlic.

Apart from the castellers of Valls during the fiestas, those of Tarragona is also spectacular. Here, the human pillar shuffles up the stairs to the cathedral!

Around the end of August, human castles are also built in Vilafranca del Penedes, a fifteen minutes drive from our casa rural.

The castles in Vilafranca are nine stories high and get higher every year thanks to the use of a new weapon: women. According to experts, women are not as strong as men, but they are much more flexible…

Cal Mestre (with garden, swimming pool and saunas) casa rural for a relaxing stay in a peaceful environment

Book our rooms and apartments.